How Does Your Name Stack Up Against the Top NP Names?

Doximity explores the most popular names for nurse practitioners

As the co-founder of the first nurse practitioner program in the U.S., Dr. Loretta Ford is often referred to as the mother of the NP movement. And while her name will live on in NP history books, we wanted to know if the name “Loretta” literally carries on among the ranks of today’s NPs. To find out, we searched across NP names in the U.S. to see what naming trends we could uncover.

Where have all the Loretta’s gone?

The most popular female first name overall among NPs is Jennifer, followed very closely by Mary. Whether you are named Jennifer or Mary probably depends on your age. The average age for a NP in the United States is 49. Mary was the most popular name in the 1940’s-1960’s, while Jennifer rose to popularity in the 1970’s-1980’s.

For male NPs, Michael is the most popular by a wide margin, with David, James & John in a dead heat for second place. Interestingly, this does not quite match the lineup of Doximity’s recap of most popular doctor names, where John commands the winning spot. This may be because the average male doctor is 55, which is six years older than the average NP. John has been a popular male name for more than 100 years, especially in the 1940’s-60’s. By contrast, Michael achieved especially strong popularity in the 1970’s, 80’s and 90’s, when many current NPs were born.

The state of a name

The state trends follow the overall nationwide naming trends. Jennifer is the number one female NP name in 26 states. It is followed closely by Mary, which wins in 19 states. And in fact, if you look at the number of states where a name is ranked either #1, 2 or 3, Mary slightly edges out Jennifer, 46 states to 43. With two names that are both so popular, it’s hard to discern strong regional trends. Jennifer seems to be slightly more popular in the South and West, while Mary is pretty evenly spread across the country. The stronghold for the name Susan is in the Northeast, and Patricia makes its lone appearance in the #1 spot in New York State.

Michael tops male NP name in 25 states. David, James and John trail behind as distant runners-up, with only 7-8 states each. Michael dominates the Northeast and Midwest. David is strongest in the Northwest, while James does best in the South. There are also a couple of interesting anomalies here and there, such as Frank being the fourth most popular name in Delaware, but it doesn’t make the top 5 list in any other state. Similarly, Jeffrey is ranked #4 in North Dakota, but no other state seems to have a significant NP population with that name. 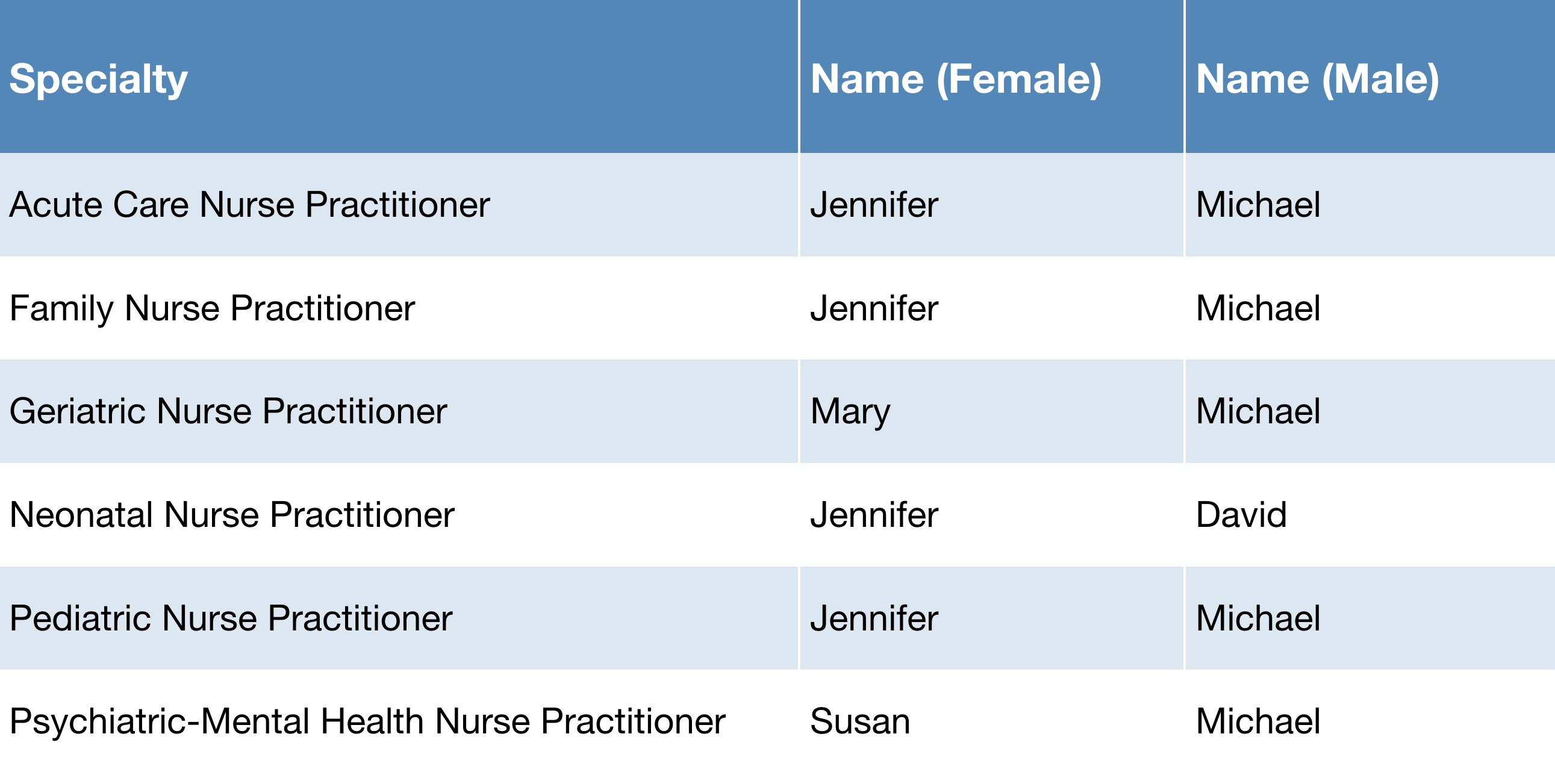 Among female NPs, the popular names for most NP specialities match the overall ranking. For example, for acute care, family NPs and psychiatric NPs, the most popular names are Jennifer and Susan. But there are a few specialities which buck the trend. For example, among geriatric NPs, while Mary is the most popular, Linda is also a common name, which suggests that many geriatric NPs were born in the 1940’s and 50’s, when Linda was most prevalent. On the other hand, Karen stands out as third among neonatal NPs, a name that had its heyday in 1960’s.

Male NP names by specialty match the overall popularity for the most part. Michael and David are top names for geriatric, neonatal and family NPs, and they are also in the top five for most other specialities. Christopher makes an appearance as a popular name for acute care NPs, and James is on the list for psychiatric NPs.

Will the real NP please stand up?

When we look at the most popular last names across all NPs, Smith and Johnson reign supreme. Miller, Brown and Williams are on the list as well. Smith is slightly less common in the Northeast and West, while Johnson has the lead in the South. These are also the most common surnames in the United States as a whole.

What’s your name?
How does your name stack up against the most popular nurse practitioner names? The odds suggest your name probably isn’t Loretta Ford but it might be Jennifer Smith or Michael Johnson. What’s your prediction on what new names will start to trend among NPs in the next 5-10 years?

Do you know any of these Jennifers or Michaels? Claim your profile and find out: www.doximity.com.