Doctors Love the iPhone 7. Even More Than You Do.

How physicians are using smartphones today

Whether it’s the iPhone 7 flying off the shelves, or the Samsung Galaxy 7 being put on the No-Fly List, our favorite hand-held device has been making the rounds in recent news stories. Apple, in particular, has been front and center - and with their announcement of a revamped MacBook Pro at today’s Apple October 27th event, they seem to be headlining the news every week.

Our researchers at Doximity started wondering: exactly how are physicians are currently using smartphones? With over 60% of all U.S. physicians on the Doximity network, our member data provides an unparalleled wealth of information on physician technology habits and implementation to get the most accurate look at device trends in medicine.

When it comes to new technology updates, physicians are often at the top of the curve. In the first two weeks after the release of the iPhone 7, 3.7% of the general population updated to the new device. However, 4.1% of physicians adopted the iPhone 7 in this same time period - proving once again that those in the medical field are tuned in with tech.

Which iPhone model is most popular among physicians?

After the initial wave, is it possible iPhone 7 adoption will slow with doctors? It could, given that the iPhone 7 doesn’t have ‘enough’ features for people to make the change. There’s a better camera, better speakers, and no headphone jack (which some would count as a negative feature), which are all new features, but nothing as exciting and noteworthy as the changes from the iPhone 5 to the iPhone 6.

How quickly did physicians upgrade to the iPhone 7? 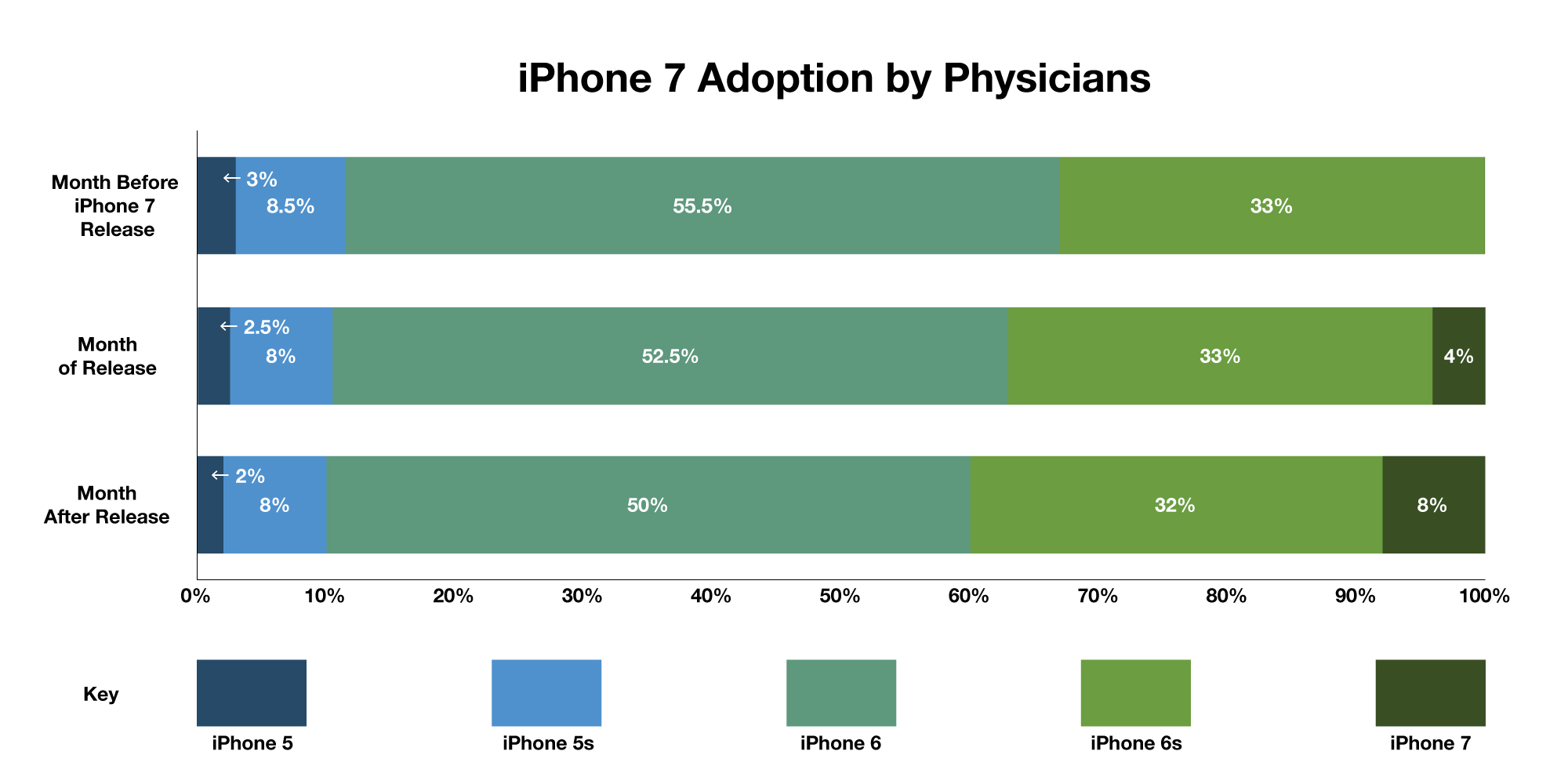 Our findings showed that certain iPhone users were much quicker than others to adopt the iPhone 7. Those physicians with the iPhone 4 were the group that most quickly adopted the iPhone 7 upon its release.

After that group, physicians with the iPhone 6 were second most likely to make the upgrade to the iPhone 7.

In past releases, the iPhone 5 and iPhone 6 have been adopted much quicker in the first month, at rates up to 37% in the month of the initial release.

Code Red! How many physicians are carrying the flammable Samsung Galaxy 7?

By our standards, thankfully not too many! Our researchers found that less than 1% of physicians on Doximity were using the fiery phone. This is good news. If you think a phone catching fire on an airplane is bad, imagine it happening in a hospital surrounded by oxygen tanks.

Are you a reporter interested in more data from Doximity's research team? Email today.