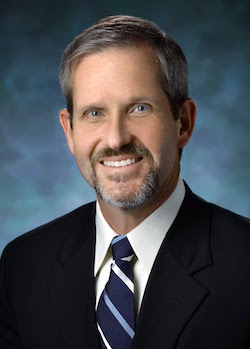 Colonel James Ficke, M.D., is Robert O. Robinson Professor of Orthopaedic Surgery at the Johns Hopkins School of Medicine and director of the Department of Orthopaedic Surgery. He is also orthopaedist-in-chief of The Johns Hopkins Hospital. During his deployment as deputy commander of clinical services at the 228th Combat Support Hospital in Mosul, Iraq, from 2004 to 2005, he was the senior orthopedic surgeon, treating more than 600 U.S. soldiers and Iraqi patients for war injuries. He is nationally renowned as an expert on the treatment of complex foot and ankle patients, lower extremity trauma patients and amputees. This is how he works.

How has the military shaped your active orthopaedic practice?

To start with, I wouldn’t be an orthopaedic surgeon if it weren’t for the military.

The military created my orthopaedic practice. I joined the Army at West Point and studied engineering then went on to Uniformed Services University for Medical School. Originally, I thought I wanted to do wilderness medicine but was exposed to an Air Force orthopaedic surgeon for a 2 week required rotation, and he was so excited about his practice that I was inspired. His name was “Doug Harryman.” He was a mentor for a short period but had a tremendous impact on me.

Ultimately, I served in the military for 30 years because I came into a position of leadership near the 9/11 events. I was at San Antonio, a level 1 trauma center, where we received many of the casualties from Iraq and Afghanistan and it inspired me to stay on Active Duty. Orthopaedic surgery through the military, research, and service of others has inspired my career in foot and ankle and trauma, which were both areas that were needed in the military. 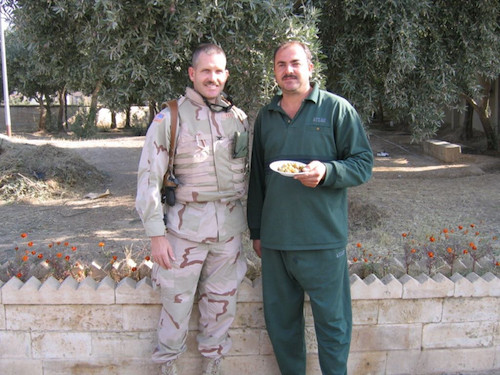 This is a picture in the olive garden of the Benham Monestary in Nineveh Iraq where we had a Medic Baptized. The caretaker served us olives from the trees behind us.

What is the last book you read for fun?

You’re going to get a kick out of this. I must confess, the last book was A Passion for Leadership, by former Secretary of Defense, Robert Gates. I enjoy reading about other people’s successes. It’s a first hand account of leadership by a highly successful individual and icon for us as leaders in academics and organizations. The book depicts his many trials and tribulations and was a remarkable story about how one person came to a position of leadership - especially with such a humble upbringing.

Where is your favorite place you have visited with the military?

Sigh… that’s a little harder question. I have a hard time with favorites and I’m not avoiding your question. Every day in life there is something incredible.

One of the most exciting places was when I served for 1 year in nothern Iraq. We had a Christian soldier baptized in Benham Monastery built in 400AD – this area had one of the largest libraries outside of Rome at the time.

An Iraqi priest was able to baptize him. This was a man practicing his Catholic faith in 2005 in Iraq in peace. I think the most exciting thing about it was that we were at a place defending the freedom of mostly individuals with Islamic faith but freedom of religion was still permitted.

It was one of the highlights of my life because it signified what we did in the military: Preserve freedom of religion/expression for many of those who may not traditionally have it.

What is the first thing you do when you wake up?

Well, like most people, I guess, I shave – shower – grab a cup of coffee – kiss my wife goodbye and head to work.

After taking care of the ‘mechanics of the morning,’ I arrive ½ hour early at work before anyone is there to plan my day, collect my thoughts, and think about the opportunities in front of me for that day.

What’s your favorite type of exercise?

Running. I try to run 3-4 times per week. It gives me time away from distractions and it’s a known fact that people who incorporate an exercise habit into daily practice are happier. They have better health overall. These days in medicine and specifically for Doximity viewers, the notion of burnout is significant. A recent paper showed that up to 45% of physicians are suffering from burnout. I score very low on the burnout ratings, and I have lots of energy and enthusiasm and attribute much of that to getting outside with my regular exercise. Certainly not everyday, but regularly, and that’s valuable.

How has Doximity influenced your career and practice?

Our Department (Johns Hopkins Orthopaedic Surgery) is partnering with Doximity with the “physician referral network,” which is a pilot right now. I’m not a big social networker, but I know many of my colleagues use that feature to keep up with other professionals. It’s a growing way to have a referral network. And clearly the articles are very valuable.

What’s the most important lesson you learned as an Eagle Scout?

Well, you’ve done some checking. I still have the rank of Eagle Scout on my CV. It’s deeply ingrained in my core values including the Twelve Points of Scout Law: Trustworthy, Loyal, Helpful, Friendly, Courteous, Kind, Obedient, Cheerful, Thrifty, Brave, Clean, and Reverent (And yes, he did name them all).

Who has influenced you the most?

Well… I mentor people and I think it’s a skill you have to practice. Sir Ernest Shackleton was a tremendous leader. He influenced my life in the way he led his endurance expedition and brought all of his people home. He kept the unruly members close and taught them accountability.

I study biographies. I think any biography you read can really influence your life and how you practice. 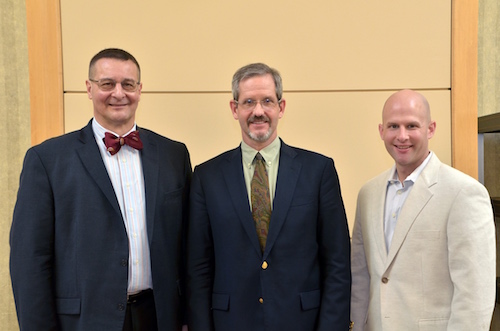 One of Dr. Ficke’s former residents whom he mentors, Chad Krueger, and one of his own mentors, Mike Yaszemski